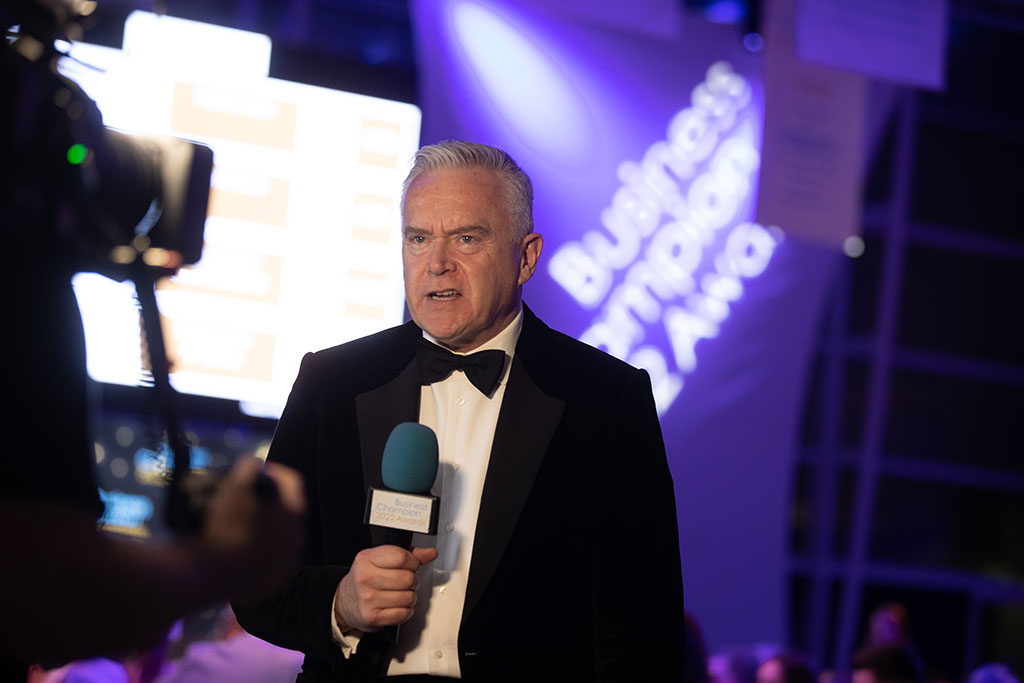 Well, after our Content Director, Cherry Martin described Huw Edwards as the ‘nation’s favourite broadcaster’, both The Times and The Telegraph have quoted her on it, which in our team’s collective mind adds weight to what we all knew to be true anyway.

It’s our team’s pleasure to announce that the man himself has confirmed that he will be returning to the East Wintergarden in March 2023 to host the second Business Champion Awards.

The inaugural awards earlier in 2022 were such a success, the team is already looking forward to Huw’s original take on presenting. Where some would give a dry speech about the process, Huw entertained the audience then led them through the awards in a celebratory yet concise manner. After sharing with the audience that we were all in the presence of a Bond star – to which there was much cheering, Huw proceeded to host the entire award with his trademark dry wit, making all the winners, runners-up and their guests laugh.

Awards founder and director Richard Alvin said: ‘Huw was the ultimate pro and went the extra mile for us to ensure that everyone had a great night at the Business Champion Awards. He’d clearly researched and planned his speeches for the evening and was so entertaining which brought each element of the awards to life.

‘We couldn’t have wished for it to be any better. Huw being himself is absolutely brilliant.

‘We’re so thrilled to announce that he’ll be back with us next March for the 2023 awards.’

A decision based on our values

Cherry Martin commented: ‘It’s brilliant to have Huw back for 2023 as we know we’re in safe hands for the finale evening. However, it had to be Huw hosting the awards because he supports both the Business Champion Awards and Business Matters’ company values, as he works from a place of truth. This needs explaining …

‘Sitting next to him, as the dinner was served, Huw asked me: ‘What is the most pressing issue that you find with journalism today? I replied instantly: ‘Verifying the facts.’ Because that, as a journalist reporting to a waiting public, is THE most important thing. If people are going to make decisions within their day-to-day lives based on the information you’re giving them, surely you owe them the truth?

It’s Cherry’s personal belief that all sides of a story should be shared, as comprehensively as possible within the moment that the story needs to go live. Of course it can be updated in the future but at the ‘go live’ moment the facts need to be checked, sources corroborated and confidence must be present in the story.

She continued: ‘Huw agreed with the need for verifying the facts straight away and we had a great discussion on the trials and tribulations of trying to accomplish this in a world where people will go to great lengths to distort the facts or at worst, make stories up completely.

‘Now there are many journalists and publications who are more concerned with selling headlines as opposed to imparting knowledge and inspiration, and these particular titles pay good money for their salacious stories. To meet a fellow journalist who believes wholeheartedly in the work that they commit to as being good, honest and true, is refreshing.

‘It’s proof to the general public that journalists aren’t all bad! If we continue to do our jobs properly we become a reliable source of information and trust.

‘Now that’s not to say that we’re always right. Sometimes the facts further on down the line can alter a former story but as long as they are verified as much as possible when going to print or sharing then I know, at Business Matters and the avenues that Huw associates with, all have the same ethos and intention in common.’

‘That’s why Business Matters has been around as long as it has and it’s why we’re so proud to have invited Huw back for year two of the Business Champion Awards and to hear him say a resounding ‘yes’’.